“Where the mind is without Fear is a hysterical poem written by Rabindranath Tagore. He wrote this poem in his famous book “Gitanjali”. Usually, poems are meant to be written by an assent of artistry but this was a totally different one. This poem was a gratifying yearning to the God for freedom and the concept of freedom in this poem is superior in all respect. Ravindranath Tagore was an optimistic writer known for his extraordinary contribution to Literature. Here’s a short analysis of “Where the Mind is Without Fear”

This poem is a piece of hearty words of invocation that attempt to break the shackles from every corner. One might have to raise their sword and fight against the skirmish world but it doesn’t have to work always. The above lines are the exact example of the prelude of the human nature. It addresses us to break the almighty belief of getting cornered and prodigality. Every word that is uttered from the mouth should not be because of a stabbing black shadow but it should be because of what the reckless eyes of an individual see themselves. The World is a unity of gracious stems of thoughts and belief so let’s not dig deeper in nasty and God-awful ways. They are the minds of visions and prospects. There are no narrow domestic walls or fragments or divisions that could scatter the world into pieces. If we fall from a greater milestone we would just sit and look frantically towards the sky to send us help. As one would tirelessly try to attain perfection.

“Where the clear stream of reason has not lost its way
Into the dreary desert sand of dead habit
Where the mind is led forward by thee
Into ever-widening thought and action
Into that heaven of freedom, my Father, Let my Country awake’’

Let us not stand on our feet and speak their words from our mouth let us not fall on our feet and garnish their gardens, Let us not give conditions to our self with flaky reason and Let us not lost the way of clear perceiving reasons. It’s neither a command nor a request but it’s the matter of our pride and integrity. We should be standing in the lines of bright colors where one would eventually lead themselves without any cry of those cruddy people. We should be free like the sky to the mountains and the drops of the oceans. As one might find peace in it through their actions of gay. And at the end, it’s the supplicating urge of freedom. As Freedom, not in sense of sentence or words but freedom should be like those petals in the sky rushing in the air with the wind. Freedom should be like a heaven on the earth with the sparkling muse of sweetness in hearts and not in any political propriety. It’s the prayer to the god that let my sleeping folks sleep in their dreams and perform in their heedful state. It’s a request to the minds of the people that fear is not a term to define but an expression to reveal out of your temple.

Poet Rabindranath Tagore, in this poem, has completely shown a broad view over the fear in the mind and diddly action of the world. In a laconic way it’s a prayer for the freedom but with the total adage of the people should be living freely.

Difficult To Be Simple – Rabindranath Tagore

It is very difficult to be simple – Rabindranath Tagore 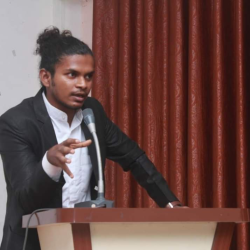 Mayuresh Patil
The writer is a SYBMM Student & A freelance Writer/Blogger. He is a book worm. His area of interest is Horror and Mythology.
He finds literature is somethingwhich can be more developed.

20 years of Harry Potter: Why HP Books Still Rule Over the Movies?

Lost in translation: Why the Harry Potter books rule over the movies It gives a more personal touch to the story...

Arundhati Roy- From The God of Small Things to The Ministry of Utmost Happiness Twenty years ago a book took the world by...

Jane Austen: The literary legend of her times

Jane Austen: The literary legend of her times Any reader worth his money has heard at one time or another of...